Vietnam Looks for Trade Deal with US

Vietnam is seeking a trade deal with the United States to replace the Trans-Pacific Partnership (TPP) free trade agreement.

Official media in Vietnam say Prime Minister Nguyen Xuan Phuc spoke to a delegation of American business people last week. He told them that he was ready to visit the United States. He added that he hopes to meet President Donald Trump for talks on trade and other issues.

Some observers say Prime Minister Nguyen has a good chance to reach a trade deal with the U.S.

Rahul Bajoria is an economist with the bank Barclays in Singapore. He says Vietnam hopes to increase exports to the U.S. with a trade deal. But he suggests that U.S. companies are also seeking access to Vietnam’s markets.

“It could be the case there might be some pressure from the large (American) industrial manufacturers like the aircraft manufacturers or train companies. All of them may be much more interested in exporting to Vietnam,” [Bajoria said.]

As much as nineteen percent of Vietnam’s $200 billion in economic activity comes from exports. Last year, the Southeast Asian nation exported $38 billion in goods to the U.S. and imported almost $9 billion in goods and services in return. 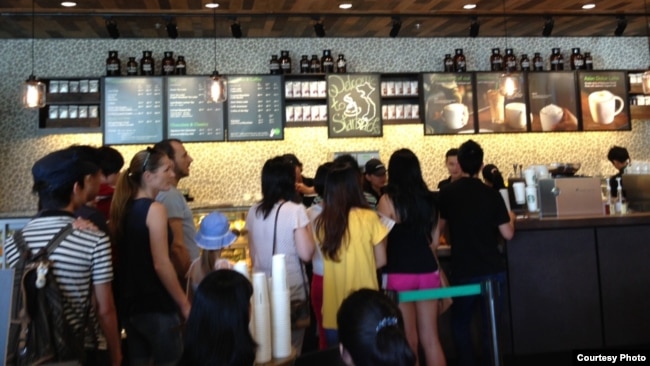 Vietnam’s imports, however, increased by more than 14 percent in January with popular American products from Apple and Dell. In the financial center of Ho Chi Minh City, even Starbucks is becoming easy to find.

Vojislav Milenkovic is with the business adviser BDG Insights. He said from Ho Chi Minh City, “You can see this every day on the street. You can see that people are trying to save and to buy high-quality products from foreign countries.”

After the U.S. presidential election, Vietnamese Prime Minister Nguyen spoke to Trump by telephone. Trump told Nguyen that he wanted to strengthen ties with Vietnam and that he was willing to meet in the United States.

Oscar Mussons is with Dezan Shira & Associates, a business consultancy in Ho Chi Minh City. He says Trump might ask for Vietnam’s support in the South China Sea, an important waterway where the U.S. is pushing freedom of navigation.

Without the TPP, Vietnamese leaders have been looking for other trade deals to lift the country’s economy. They include a free trade agreement with the European Union reached in 2015.

The deal is to take effect next year if Vietnam meets the EU parliament’s conditions.

The JATA Group (JTG) is a collection of international companies that are fast growing towards a diversified approach of business growth. The Group’s headquarters are in Los Gatos, California USA.